In 5th grade, I was enrolled in my school’s version of an advanced/gifted program.1 As part of this program, we would attend an off-campus class one or two days a week to study fun and difficult topics.

The morning of April 19, 1995 was like any other trip to class. That Wednesday, we arrived a few minutes prior to 9:00 a.m., eager to learn about clipper ships. We entered the classroom to find the television tuned to some morning show. The thought of watching television at school is rather appealing to children. Alas, our excitement was tempered by the realization that our teacher had prepared an educational video and simply hadn’t inserted the VHS tape yet.2

As we bemoaned the thought of another boring video, the distant sound of a boom reverberated within the classroom. As if by reflex, I distinctly remember looking up at the clock - logging the moment in my mind - 9:02 a.m. Students buzzed at the noise. What was it? The teacher had forgotten our video by this time, and it wasn’t soon after that the local news broke in on the television and answered our question.

As the news showed the smoking remains of some building, we stood with mouths agape - teacher and students alike. The uncertainty of what happened was elucidated in the following hours. We learned that a bomb had detonated and many people were hurt. It was hard for eleven-year-olds to fully comprehend. I am thankful to this day that the teacher decided to watch the coverage and talk with us as it happened. That no doubt helped us cope with the destruction we weren’t supposed to have seen.

As we returned to our school that day, the principal intercepted us before we were allowed back into class. He told us that we shouldn’t tell the others what we had seen. He explained that several of our classmates' parents were hurt, killed, or missing and that they hadn’t been notified yet. That was a long day. I was so happy to return home to my mother’s embrace.

That was 17 years ago and that building was the Alfred P. Murrah Federal Building. The bomb was placed by Timothy McVeigh, having conspired with Terry Nichols and others. The damage exceeded $600 million, 680 were injured, and 168 were killed. Of those 168, 19 were under the age of six. Among the 19, one in particular resonated with me that day - one-year-old Baylee Almon. 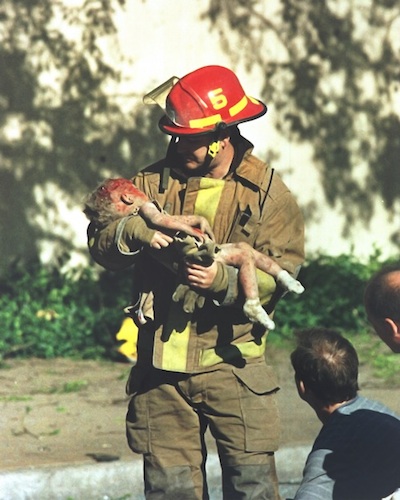 No picture better captured the sadness of that day and encapsulated what was lost. Every year I think of Baylee and wonder what she might have accomplished if it were not for this act of terrorism. Seventeen years later, I envision Baylee excitedly prepping for prom and planning what classes she would take during her first year of college in the fall. I am reminded of all of the great things I have been fortunate enough to experience since April 19, 1995 and how those 168 were robbed of something similar. Therein lies the true tragedy.

It is hard to imagine that seventeen years have passed. However, there is no need to remind Oklahomans to “never forget.” I assure you that no amount of time will remove the indelible mark left by that bomb. It is my hope instead that the shared empathy and sense of community that people exhibited that day are never forgotten - never lost.