Congress has gone through periods of relatively high partisanship before — for example, at the turn of the 20th century. But the degree of polarization in the Congress is higher than at any point since the Great Depression by a variety of measures, and is possibly at its highest point ever. (Most of the evidence suggests the trend is asymmetric: Republicans in Congress have become much more conservative, while Democrats have become only somewhat more liberal.)

On Saturday, October 12th, the Oklahoma Sooners and Texas Longhorns will meet in the Cotton Bowl for the 108th edition ofRed River Rivalry. Unlike many past match-ups, Texas is down this year. With a record of 3-2, and several poor performances, most analysts aren’t expecting the Longhorns to provide much competition for the Sooners. As a Sooners fan, I always try to remain skeptical of such talk.

One of the great improvements this year for Oklahoma is their defense. I began poking around the statistics and noticed that Oklahoma has not faced a team ranked better than 79th in total offense. This was particularly intriguing because Texas is ranked 39th. I began to wonder, beyond the “anything can happen in a rivalry” wild card, if there were any statistics that might point to a closer game than most expect.

First, I looked at the offensive performance by each team: scoring, total yards, passing yards, and rushing yards. I took both team’s output in each game and normalized them by their respective opponent’s average in the category of interest. This value was found by subtracting the opponent’s average from either the Oklahoma or Texas output, and then dividing by the opponent’s average. For instance, if Oklahoma’s opponent surrendered an average of 14 points and the Sooners scored 28, then the normalized value would be unity. The same was done for each team’s defensive performance. 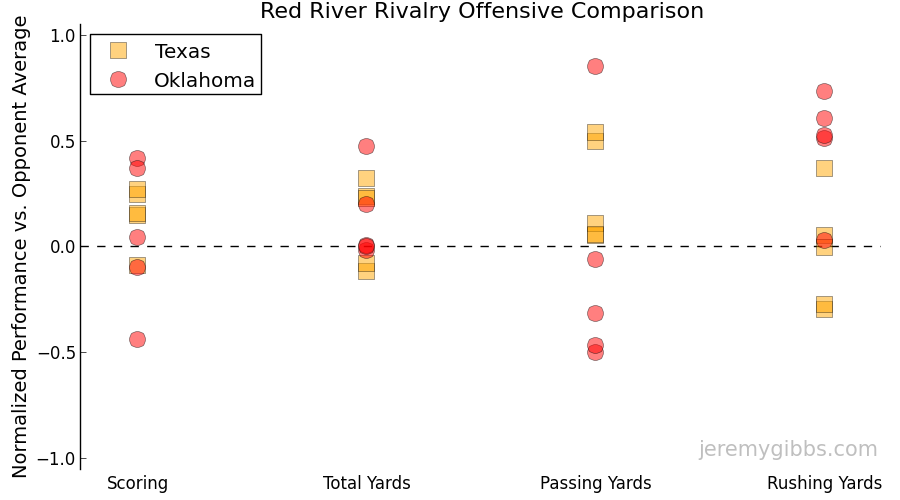 Offensive production from Texas and Oklahoma. Values are normalized by their opponents' respective average.

In looking at the offensive plot, Texas has more positive scoring performances than Oklahoma (4/5 vs. 3/5), while Oklahoma has the more impressive relative single scoring output. Passing performance illustrates a rather stark difference between Oklahoma and Texas. Outside of the one particularly strong outing from the Sooners, their passing output has been relatively poor when compared to Texas. Generally, the opposite is true for rushing.

On the defensive side, the Oklahoma Sooners have more impressive defensive outings than Texas in all categories. This is especially evident in scoring and pass defense. 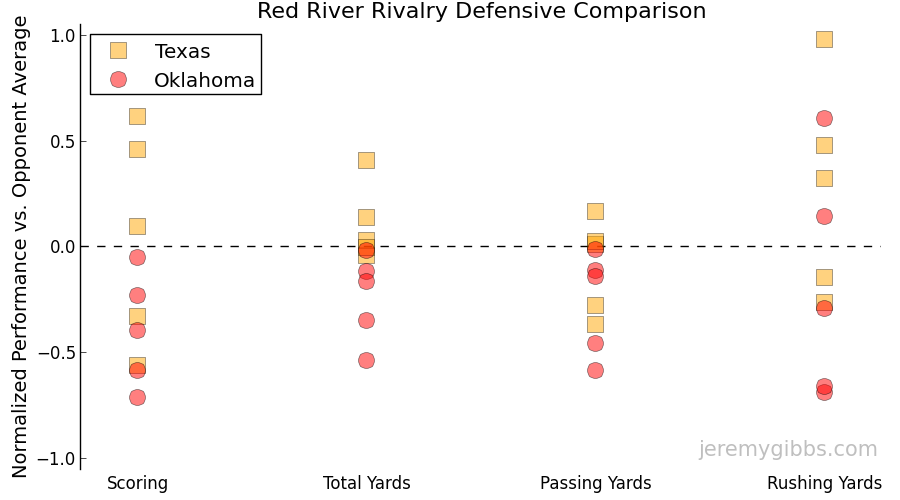 Defensive production from Texas and Oklahoma. Values are normalized by their opponents' respective average.

However, these figures can be misleading. On offense, the positive (negative) outliers can arise from playing weak (strong) opponents. The opposite is true for defense. To account for this, I added a weighting term to the normalized values that took into account the opponent’s national rank (out of 123 teams) in each respective category. The idea was to penalize each team for poor performances against weak opponents and to reward good performances against strong opponents. The weighting procedure is very ad-hoc1, prescribed for offense as:

and for defense as:

The hope in applying a weighting factor is that the spread among data points, and thus the subsequent interpretatios, are more meaningful. 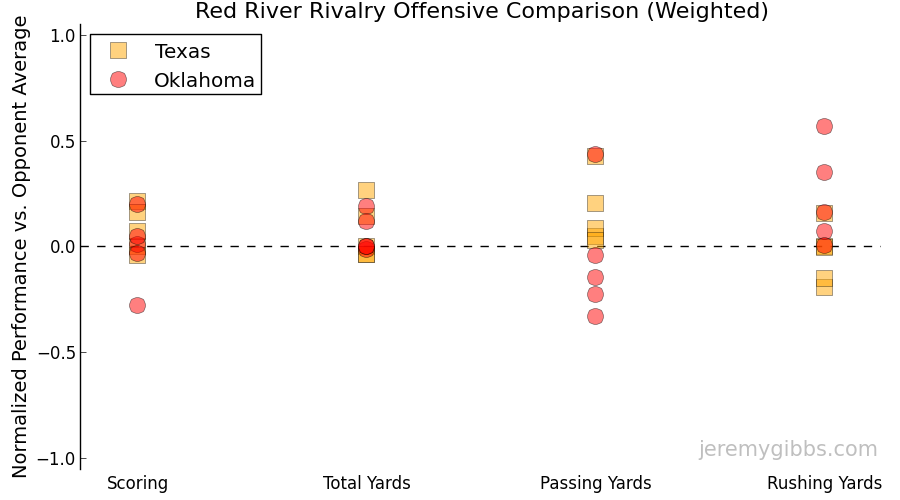 Indeed, examination of the offensive data shows that the spread of each category is reduced. We see that Oklahoma isn’t a scoring juggernaut like in the days of Sam Bradford and Landry Jones. Comparatively, Texas has performed slightly better than the Sooners. Total yards are fairly similar, while the components of the total are different. Oklahoma’s offense appears to thrive in the running game, while the Longhorn’s offense is driven by passing. 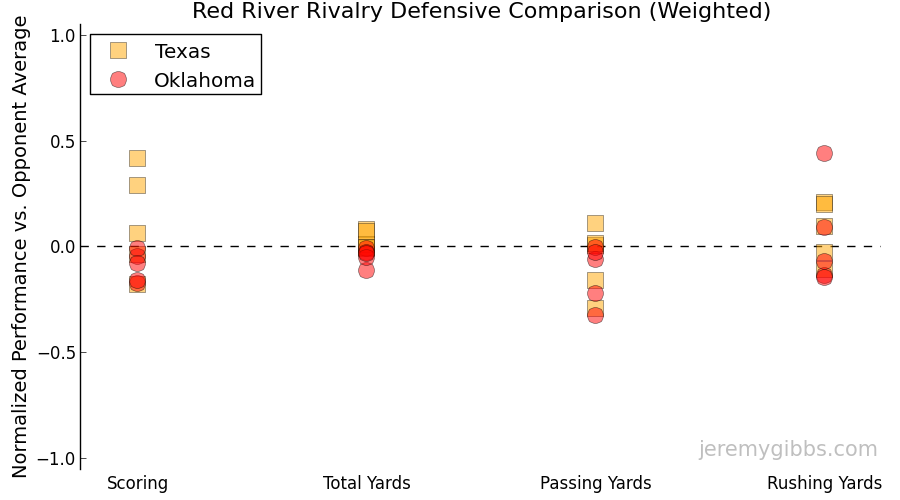 Likewise, inspection of the weighted defensive data indicates that Oklahoma remains ahead of Texas, although the differences aren’t as drastic as they originally appeared. We see that Oklahoma is largely on the “good” side of each defensive category. A lone exception is the running game, where the Sooners are less consistent. Texas, on the other hand, seems to yield relatively more yards, with the bulk of the damage coming from their opponents running game.

My bet is that the Sooners shut down the Texas running game and force a few turnovers in the passing game. I also expect the Sooners to have success running the ball. I am picking the Sooners to win, although in a closer game than most expect2.

The Oatmeal offers a smart reminder that Columbus Day is one of the dumbest holidays observed by the United States Federal Government:

The point I’m trying to drive home is this: Christopher Columbus was awful. He discovered the New World much like a meteorite discovered the dinosaurs. And good ol’ Chris Columbus, sex slaver, mass murderer, and champion of sociopathic imperialism, has his own federal holiday. This is an honor shared by Abraham Lincoln and Martin Luther King, Jr.

I repeat: the father of the transatlantic slave trade is honored on the same level as Abraham Lincoln and Martin Luther King, Jr.

Update: My friend Scott shared a link to reddit that pushes back slightly against this Oatmeal piece.

A Short History of the Highrise

I’ve always loved archival films built of photographs, but I’ve found myself wanting to touch the photographs. Now we’ve made this possible — virtually. We’ve built an accordionlike interactive film experience that allows viewers to dig deeper into the films’ stories and archival materials.

Ultimately, this story is less about buildings than it is about people. It is about the places we call home, and how we decide who will live where. If you look closely, seemingly ordinary buildings can reveal the values of the society that has created them.

This project, created for The New York Times Op-Docs, is part of the National Film Board of Canada’s continuing HIGHRISE project, an Emmy Award-winning multiyear, many-media collaborative documentary experiment.

Check out the project here. So very neat.

A Day at the Institute for Advanced Study

In a rare opportunity, I’ve been invited to spend the day at the Institute for Advanced Study (IAS), an isolated, 800-acre compound in Princeton, NJ, that has for 83 years called itself home to many of the world’s most brilliant scientists: Albert Einstein, Alan Turing and Kurt Godel, among dozens of other notable scholars, all worked on some of their most seminal research at IAS.

In one of my favorite passages, Drummond interviews particle physicist Nima Arkani-Hamed and asks about the philosophy and expectations at IAS:

“There is a purity of principle to what we do here,” he says. “The Institute understands that progress often comes in increments, and you need a lot of time, a lot of failure, and a lot of work to answer these big, fundamental questions. Patience for that is more and more rare in our society.”

This is the absolute antithesis of the idiotic desire from politicians to only fund commercially-viable science. Perfect.

Colin Nissan, writing for McSweeney’s, with a rather NSFW ode to autumn:

Have you ever been in an Italian deli with salamis hanging from their ceiling? Well then you’re going to fucking love my house. Just look where you’re walking or you’ll get KO’d by the gauntlet of misshapen, zucchini-descendant bastards swinging from above. And when you do, you’re going to hear a very loud, very stereotypical Italian laugh coming from me. Consider yourself warned.

Seriously, if you don’t like the f-word, don’t click the link. Otherwise, enjoy one of McSweeney’s best. They even have a new mug - a perfect companion to this one.

Dogs Are People, Too

FOR the past two years, my colleagues and I have been training dogs to go in an M.R.I. scanner — completely awake and unrestrained. Our goal has been to determine how dogs’ brains work and, even more important, what they think of us humans.

Now, after training and scanning a dozen dogs, my one inescapable conclusion is this: dogs are people, too.

Berns goes on to detail how his findings might shape society’s view on pets in terms of property rights. My wife and I have a young dog, Riley, who has a personality that rivals any person. It has never crossed my mind to think of her as property. She’s simply just one of the family.

It’s not hard to find a chef that dislikes traditional menus: “They’re boring,” Ferran Adrià tells Grub Street. Eleven Madison Park’s Daniel Humm agrees: “They make the meal too much of a transaction — not something you would do among friends.” In this golden age of eating, high-quality food choices are more varied than ever before, high-end restaurants are democratized so all are welcome, and going out to a nice meal is a relatively affordable reality. Menus have changed, too, but not necessarily for the better. Today’s menu formats have many problems, and it’s time to rethink them.

Fred Vogelstein, writing for The New York Times, with a thorough historical look at the lead-up to the iPhone’s unveiling in 2007:

Jobs rarely backed himself into corners like this. He was well known as a taskmaster, seeming to know just how hard he could push his staff so that it delivered the impossible. But he always had a backup, a Plan B, that he could go to if his timetable was off.

But the iPhone was the only cool new thing Apple was working on. The iPhone had been such an all-encompassing project at Apple that this time there was no backup plan. “It was Apple TV or the iPhone,” Grignon says. “And if he had gone to Macworld with just Apple TV” — a new product that connected iTunes to a television set — “the world would have said, ‘What the heck was that?’ ”

Twitter has filed paperwork with the Securities and Exchange Commission to become a public company, which will allow outside investors to buy and trade stock in the company in the coming months. The San Francisco company will trade under the symbol TWTR when it goes public, it revealed in the S-1 document it filed with the Securities and Exchange Commission.

Despite not being profitable, they hope to raise $1 billion during the initial public offering.